The organization's mission is to promote and support education, interpretation and conservation of the cultural and natural values of the Roderick Haig-Brown Park on the Adams River & to protect wild salmon.

The Adams River Salmon Society is run by a volunteer board of directors who are elected by the membership at the Annual General Meeting. The primary focus of the Society is to help organize and run the Salute to the Sockeye held during the dominant run every four years. In addition, the Society helps to determine how best to utilize the proceeds from the Salutes, including the event admission revenue, to fulfill its mandate to encourage and facilitate the education and conservation of the natural and cultural resources of Roderick Haig-Brown Park. For example, funding for the interpretive signage throughout the Park came from the Salute proceeds, known as the Legacy Fund. Another project for the Society has been the restoration of the former overflow parking lot, which began with the planting of over 1,000 tree seedlings in the spring of 2010. Learn more

The Nature Education and Resource Centre was created by the Baker Creek Enhancement Society in 2002. The Centre is located at the West Fraser Timber Park, upstairs in the concession building. The Centre is open Monday to Friday 9:00am to 4:00pm. Learn more

The Hatchery is 100% volunteer run by the Bowen Island Fish & Wildlife Club. They do not have regular open hours except for special events like the Coho Bon Voyage held on the first Sunday of each June. However, depending on the time of year, the hatchery may have developing wild salmon eggs in the egg trays and salmon in the tanks ready to be released into the Bowen waterways. Their volunteers are at the Hatchery almost every day to clean, feed and care for the wild salmon. Learn more

Burns Bog Conservation Society conducts educations programs, tours, day camps and awareness events. The society built the boardwalk systems within the Delta Nature Reserve, the only accessible part of Burns Bog. We publish peatland educational materials for all ages, and partner with environmental organizations academic institutions to create and distribute accurate and up-to-date information on the peatlands. Learn more

Chilliwack Vedder River Cleanup Society was founded in 2002 by anglers, birdwatchers, conservationists, biologists and concerned local residents. CVRCS is a nonprofit organization that unites individuals who are concerned about the increasing amount of garbage being left along the Chilliwack/Vedder River.

The society has two major objectives:

By using an "Adopt a River" model, to organize groups and individual volunteers who wish to clean up the river.
To educate the public on the value of the river and the need to keep it clean. Learn more

Cougar Creek Streamkeepers is an informal group of volunteers dedicated to restoring and maintaining the health of Cougar Creek, a salmon stream that rises in Surrey, British Columbia (Canada), flows through North Delta and empties into the Fraser River. Learn more

The Friends of Cowichan Creeks project began in November 2010. The organization has been been working to monitor, protect, and enhance creeks throughout the Cowichan region by facilitating the work of streamkeeper groups. Learn more

The FVWC is a coalition of individuals, groups, and agencies working to promote healthy watersheds in the Fraser Valley by facilitating understanding and action in local communities.
Learn more

Hoy-Scott Watershed Society, (HSWS) is a volunteer run society that operates a small salmon hatchery at Hoy Creek, and conducts a salmon enhancement program in partnership with the City of Coquitlam, and technical expertise from the Department of Fisheries and Oceans Canada (DFO). Learn more

Hyde Creek Watershed Society operates an Education Centre and Salmon Hatchery. It is run by a group of dedicated volunteers working to preserve and enhance fish and wildlife habitats and promote environmental awareness & education to the Public.

Come by the hatchery between 9:30am-11:30am on Saturdays for an informal tour of the Centre. Learn more

Find an Event Near You

Join us for the 11th annual Powell River Dinner & Auction! The evening will consist of live and silent auctions as well as several exciting raffles. The auctions will feature fishing adventures, original artwork, giftware, jewelry and other unique items. Tickets are $50.00 each and are available at Marine Traders or Powell River Outdoors. Tables of ten are available.

We look forward to a successful fundraiser with proceeds to be directed towards salmon conservation, restoration and enhancement in the Powell River Region.

Complete the salmon's epic migration, see the challenges they face, and find ways to get involved.

Salmon Stewards face off against a Rockslide

Salmon stewardship is woven into the culture of First Nations from a history that goes back thousands of years. It’s seen as a sacred responsibility, reflected in stories that are passed from one generation to the next. 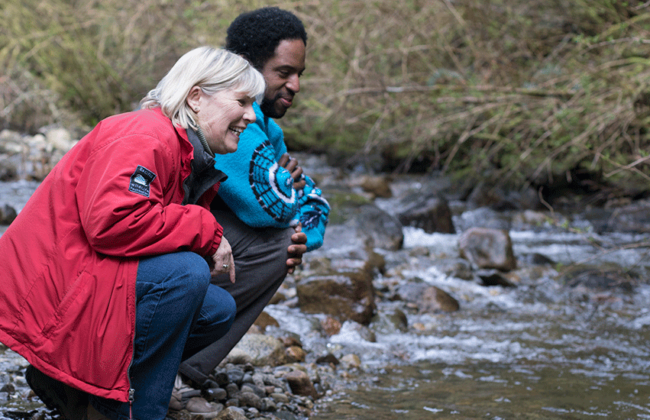 Get a Stream Address

Salmon Sundays are an institution at the Mossom Creek Hatchery and Education Centre in Port Moody. Visit any Sunday and you’ll likely encounter one of the founders – Ruth Foster or Rod MacVicar – and a cluster of volunteers.