Salmon in the Cities

A snorkel and a camera

On the trail of urban salmon: Fernando Lessa uses his expertise in biology and photography to make his Lower Mainland neighbours more aware of what's in their own backyard.

Fernando Lessa is smitten by the urban salmon that live in the streams, rivers and creeks in and around Metro Vancouver.

Armed with his snorkel and underwater camera equipment, Lessa has been exploring these waters for the last five years, capturing stunning images of salmonids and their underwater habitats.

Still, his most cherished memory is his first glimpse of a salmon in the city – a Chum swimming in Byrne Creek back in 2016 – shortly after Lessa moved to Canada.
“I remember that day very clearly. I was on a bus and I saw a sign in the distance that said salmon habitat and I decided to go and check it out. That is when I saw my first, and after that, I guess I just could not stop,” said Lessa, a biologist and professional photographer, originally from Brazil.

As he explored Metro Vancouver’s underwater world, Lessa realized that despite a deep appreciation for salmon, many residents are not aware of the salmon streams that are in their very own neighbourhoods. He decided to do what he could to change that – turning his photos and observations it into a book of beautiful images on urban salmon in Metro Vancouver streams.

“You have to know about something so you can care for it and protect it. My goal with the Urban Salmon Project was to educate people and show how amazing it is to have salmon swimming so close to us,” Lessa said.

Lessa also volunteered with various streamkeeper groups, such as the Stoney Creek Environmental Committee, and to boost the impact of conservation efforts he also joined in giving educational presentations on salmon in local schools.
Early in 2021, Lessa’s book became a documentary film to showcase urban salmon, the threats to their habitat, and conservation efforts by local streamkeepers.
For Lessa, knowing salmon are all around us is one way to help people underdstand the need to protect our environment and use resources wisely. It can help us plan for the future,” he said.

We completely agree! One of Lessa’s wonderful images – a Coho fry travelling through Stoney Creek is now featured in one of our salmon shareables – intertwining these two urban projects about salmon.  See it – share it – below, and thank you Fernando!  urban salmon project 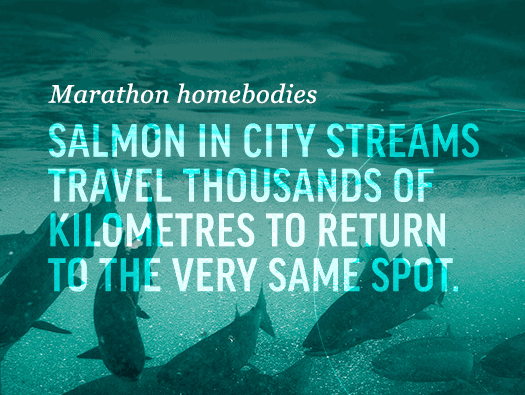